As part of Geoff Keighley’s Summer Game Fest Kickoff event today, Koch Media announced a brand-new publishing label, Prime Matter, and revealed new games that will be part of it. The company also gave updates on existing games, and announced that Kingdom Come: Deliverance is headed to Nintendo Switch later this year, developed by Saber Interactive.

Koch Media says Prime Matter is a new label with the aim of pioneering new games and styles and giving smaller studios a platform to shine on a big stage. Koch is calling it a “premium publishing label.”

Koch CEO Klemens Kundratitz said Prime Gaming will offer a range of immersive and diverse games from “amazing” talent around the world. Prime Matter will work “in harmony” with the studios and their visions to ensure their creative ambitions are realized, according to the executive. The idea is to “lead through creativity and expression,” Kundratitz said, delivering games that offer “larger-than-life” storytelling, and, above all else–are fun.

To support Prime Matter and Koch Media in general, the company also announced a new series called Koch Media Primetime. This will be a weekly video series showcasing gameplay and trailers for upcoming Prime Matter games. There will be streams three times per week, every week, until the end of time, Koch Media said–that last part was a joke (we think). There will also be Q&As with developers as part of the Primetime series, so it sounds like a good time for fans.

Prime Matter is based in Munich, Germany, and it’s led by what Koch says are seasoned industry veterans along with new young talent.

“Games originate from the minds and hearts of the developers. Prime Matter is focused on maximizing this potential from the studios while empowering their dream or visio,” Koch Media’s Mario Gerhold said. “One of our core values is to enable and support the studios, giving them the chance and freedom to express themselves within their game as they deserve. Some of the most treasured IPs in our industry started off with crowd-funding or as side projects which the developers truly believed in… history has proved that inspiration and talent is not defined by stereotypes.”

“Over the past 25 years of success, we have seen Koch Media grow significantly,” Koch’s CEO Klemens Kundratitz said. “From ambitious indies taking their first step who need that full development and publishing support without compromising their dream, to the big studios that required our well established global distribution and publishing network, the more opportunities we created the more it made sense to add an additional string to our bow.”

Getting into the games themselves, Prime Matter’s biggest game, perhaps, is Payday 3. It’s still years away from release, according to Koch, but the company shared a new piece of art that speaks to the spirit and tone of the heist game. It shows a team of four thieves in a city that appears to be New York. The developers said the game takes place across the United States, so it might not be limited to New York alone. The idea is to allow players to live the fantasy of becoming a world-class criminal.

Koch only just became attached to Payday after it signed a €50 million deal with Starbreeze to fully fund the game and help bring it to market with marketing and other methods of support.

Payday 3 is scheduled to release in 2023 for PC and console, running on Unreal Engine 4.

A new look at Payday 3

Warhorse Studios’ no-magic Medieval RPG Kingdom Come is headed to Nintendo Switch, developed by Saber Interactive in collaboration with Warhorse. There is no word yet on a release date or a feature list for the Switch edition, but we do know it’s coming.

A brand-new game coming to Prime Matter is CrossFire Legion. Developed by Blackbird Interactive (a team made up of former developers at Relic and EA), Legion is set in Smilegate’s CrossFire universe. The game aims to offer “classic” RTS multiplayer and deliver a new generation of warfare. The game has a full-length single-player campaign and multiplayer support, according to Koch.

Another brand-new game announced by Prime Matter is The Last Oricru, which is a unique-looking game that blends medieval and sci-fi elements. In a trailer we saw, you wake up in some kind of chamber and bang on the glass to get out. A giant alien enemy is there waiting for you.

An action-RPG, The Last Oricru puts you into the shoes of one of the last humans on the strange world who is shipwrecked there. Your mission is to find out what happened and unlock the mysteries of the strange planet you’re trapped on. 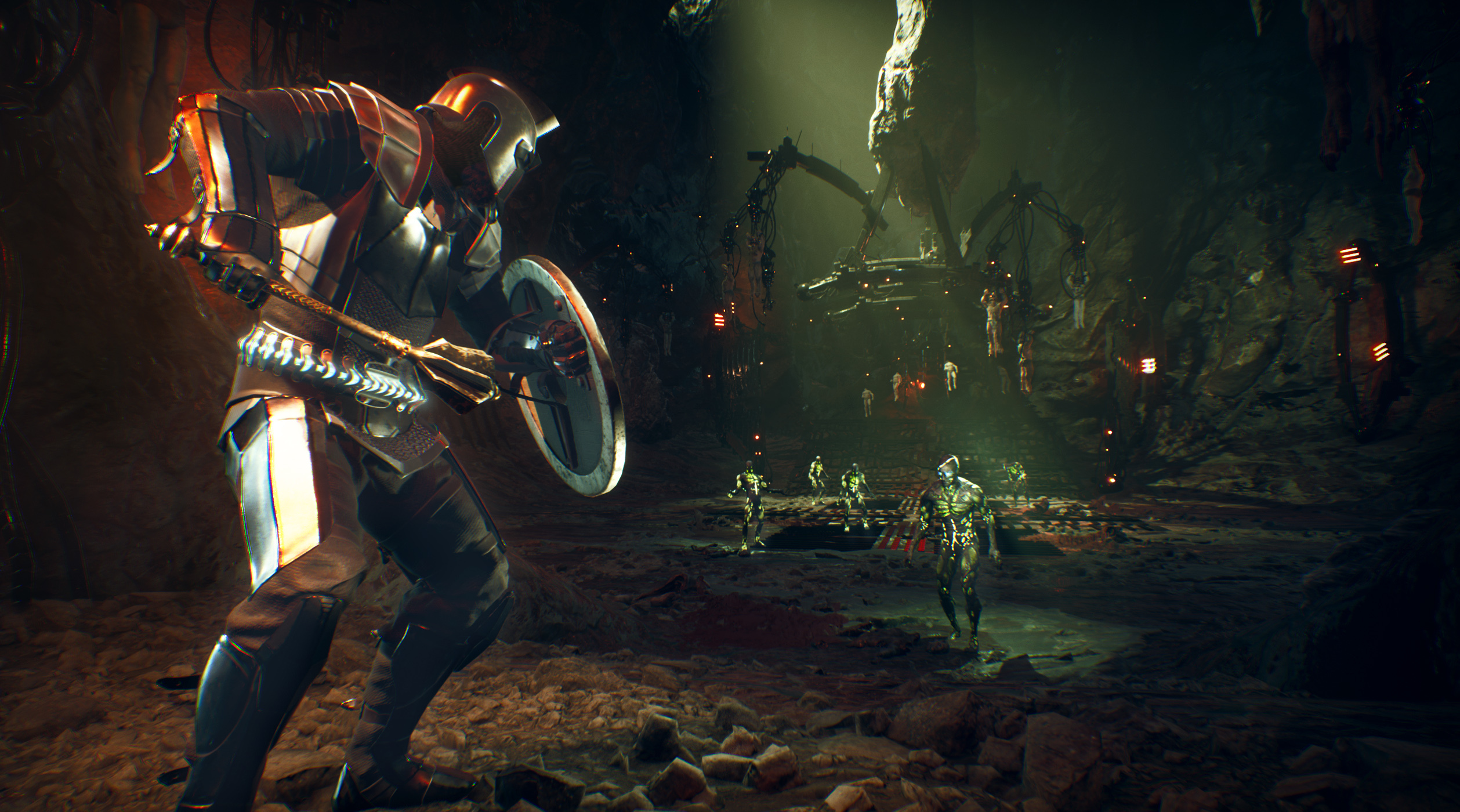 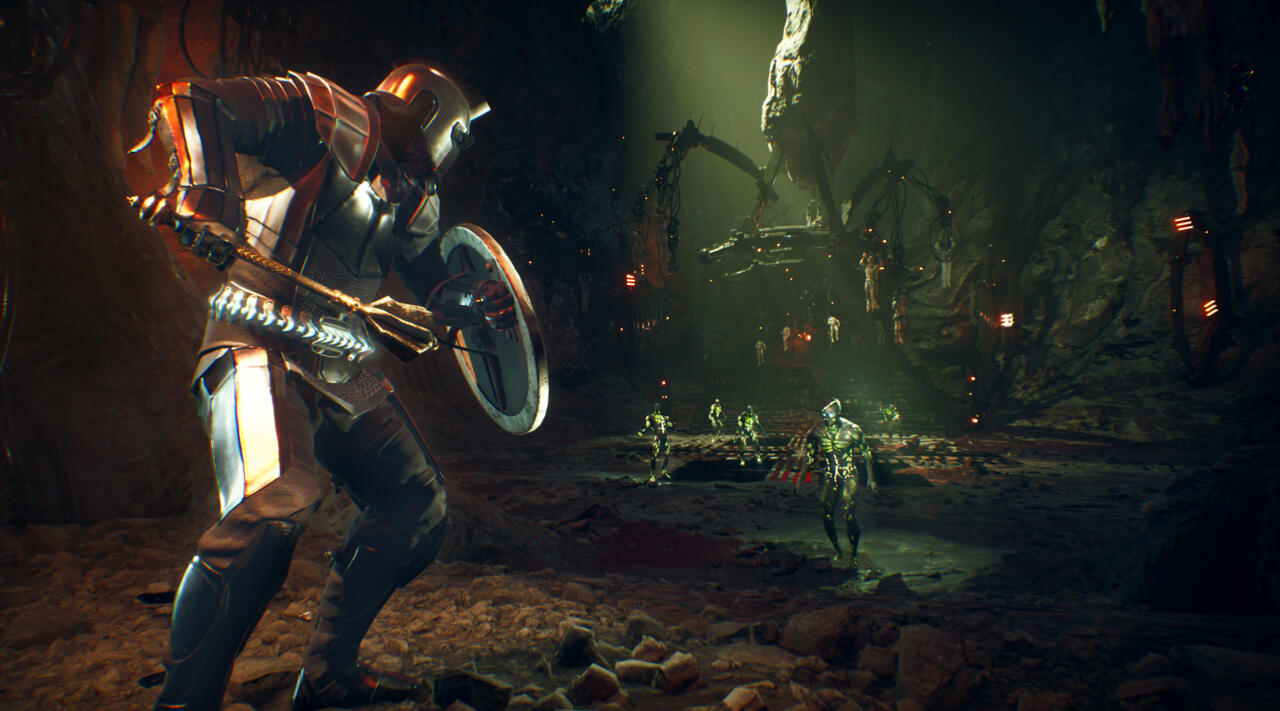 In terms of combat, The Last Oricru has players facing off against “dozens” of enemies. You can use one- or two-handed weapons, while you’ll also have shields and maces for defense. Players can also make use of magic to attack and defend.

The Last Oricru has RPG systems as well that allow you to invest in a particular set of skills and develop them over time. There is also couch co-op, including drop-in, drop-out co-op. The developers also say the world will react to your choices, so the decisions you make will define your path through the world. You can side with factions or betray them, and each has a consequence.

Developer Gold Knights is behind The Last Oricru, which is slated to release in 2022 for PC and consoles–including PS5 and Xbox Series X|S–using the Unreal Engine 4.

Ruiner developer Reikon Games from Poland is bringing a new game called Final Form to Prime Matter. Described as a fast-paced shooter, your goal is to find the … final forms … of ancient, cosmic creatures. Set on an alien planet overrun with hostile forces, the game aims to carve out its own unique place in the FPS space. Your character is equipped with a valkyrie suit and special skills related to that, and the game overall takes place in a “post-cyberpunk” universe. Little else is known about the game, which appears to be early in development with no release date yet. But Prime Matter did confirm it’s in the works for PC and console, built using the Unreal Engine 4, and it has support for single-player and co-op for up to three users.

“Making this game is like coming back to our roots,” Reikon Games co-founder Magdalena Tomkowicz said. “Final Form has been brewing and growing for a long time, inspired by our passion for exploring the unknown and nourished by works of art that contemplate possible futures of mankind, the civilization we call our own and whatever might lie beyond. We’re looking forward to revealing more of FF, its blood-pumping movement and combat, breath-taking environments and haunting universe. The main focus of our work is the soul of the game.”

Echoes of the End

Another exciting new game announced during the showcase was Echoes of the End. Developed by Myrkur Games, which is based in Iceland, Echoes of the End features The Valhalla Murders actress Aldís Amah Hamilton in the lead role of Ryn. She is a seasoned fighter who can “manipulate and destroy” matter.

Based on a unique original fantasy world, the game combines fighting, puzzles, and relationships, according to the studio. We only saw a brief teaser trailer, so there is little to go on. But Prime Matter did confirm it’s one of the first publicly announced Unreal Engine 5 games, and it’s coming to PC and console. There will be single-player, while multiplayer support is to be confirmed.

“We’re incredibly excited to announce our partnership with Koch Media for the development of our upcoming action-adventure game,” Myrkur Games CEO Halldór S. Kristjánsson said. “Koch shares our high ambition and passion to deliver phenomenal gaming experiences, and their team has been wonderful to work with. Koch empowers us to do what we do best, and we couldn’t be more excited to show you some of what we have in store.”

Another game that stood out during the showcase was Scars Above, from Serbian developer Mad Head Games. Described as “Alice in Wonderland meets Alien,” the game gives off strong Dead Space vibes. You play as a woman, Kate Ward, who is investigating an alien planet looking for answers to the mysteries surrounding her. The combat plays out through gunplay, and Scars Above uses a Destiny/Borderlands-style system that shows how much damage you’re doing with numbers that flash on screen. In the brief video we saw, there were some very terrifying-looking monsters who put up a good fight. The studio says the game will be challenging.

“We are beyond excited to give people the first sneak peek at our upcoming title Scars Above. While we’re not giving to much away at present–no spoilers, if you will–but the story revolves round our main protagonist, Kate Ward, a scientist and astronaut stranded on a strange and hostile alien world,” said game director Ivan Zorkić.

Scars Above is slated for release in 2022 across console and PC, made using the Unreal Engine 4, and as a single-player only title. 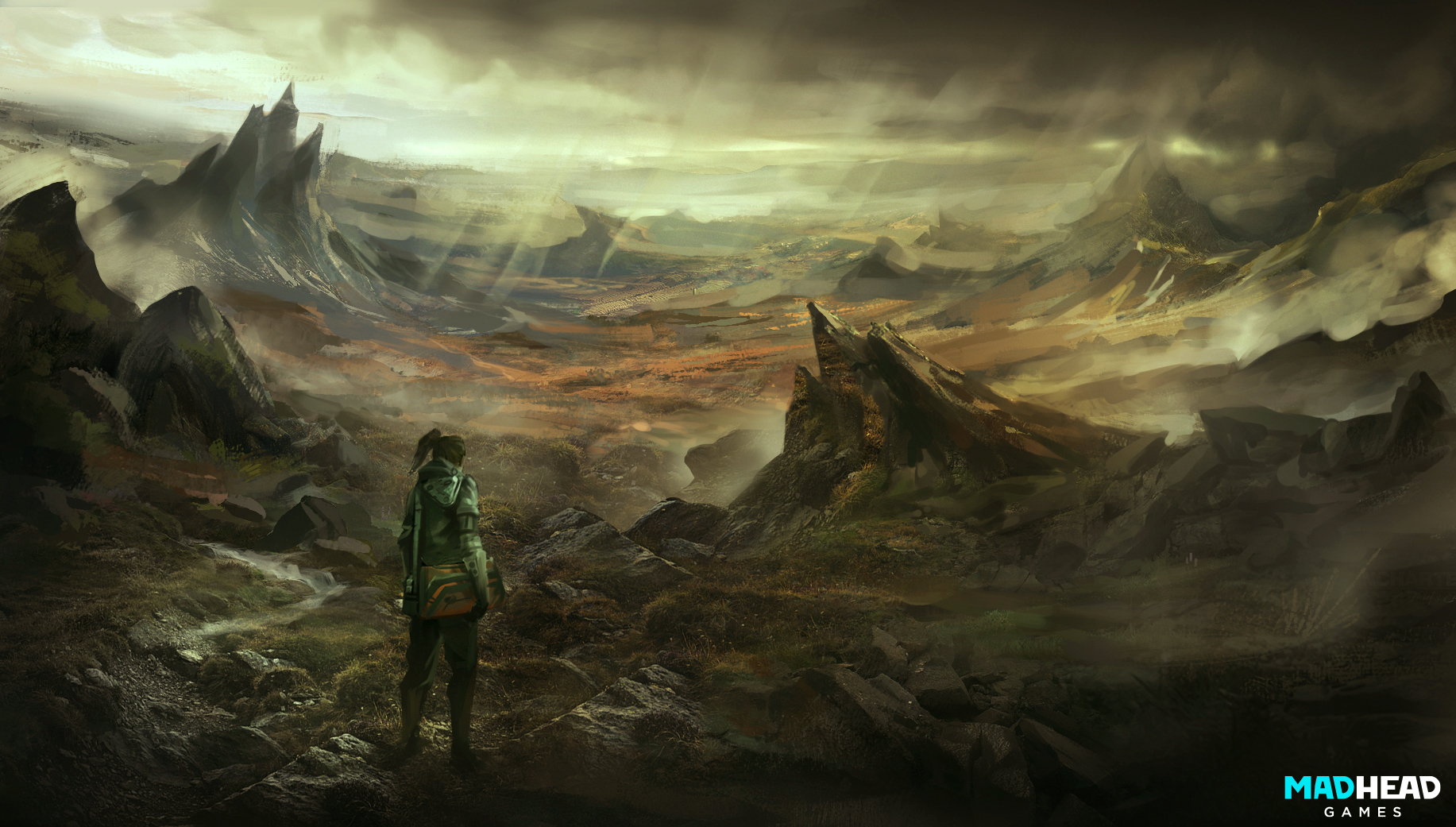 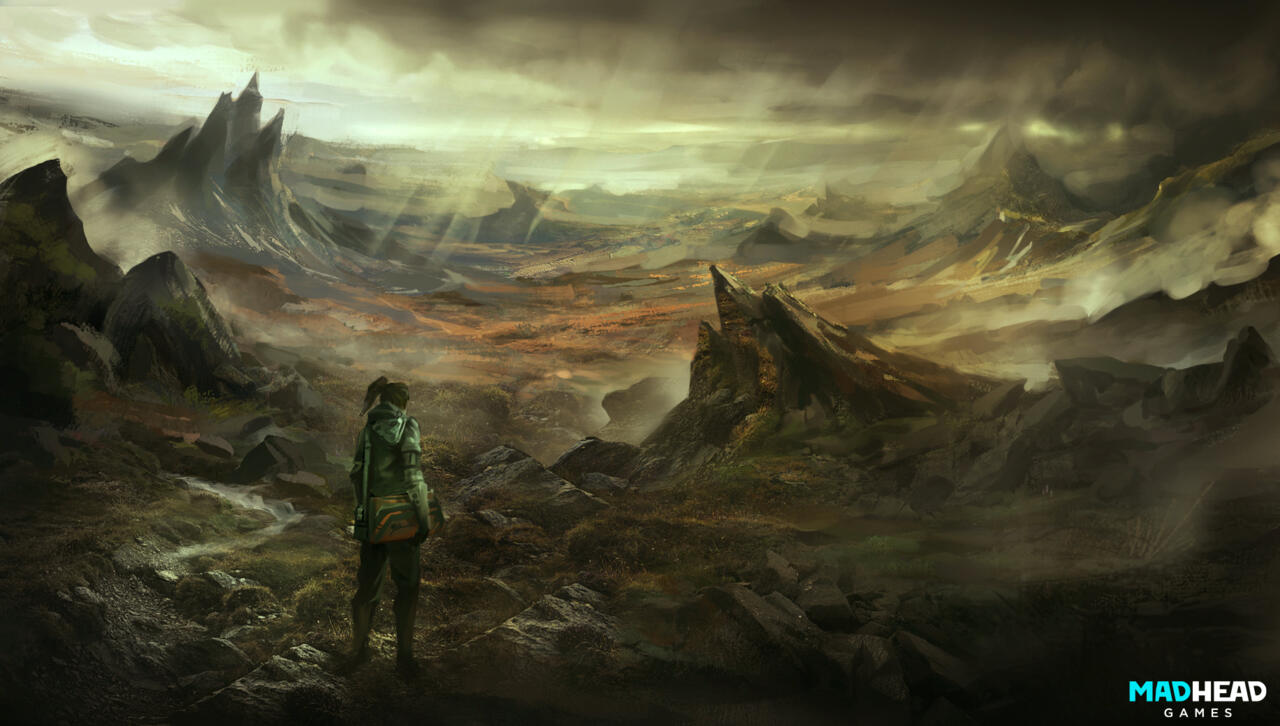 Prime Matter announced that Painkiller is coming back, and … well, that’s about it. The publisher only confirmed that the franchise is back, teasing it with a creepy screenshot featuring skulls and meant to capture the spirit of the franchise. Saber Interactive is the developer, but there is no word yet on release date for the new Painkiller.

Prime Matter will publish the next game from Kingdom Come developer Warhorse, which hasn’t been announced yet. Additionally, the next-gen version of the game Outward from Nine Dots Studios will be published by Prime Matter, while the console edition of Mount and Blade II: Bannerlords will also come from Prime Matter.

The Prime Matter announcement event also included mention of games that were already announced that will be published by Prime Matter. These include the turn-based game King’s Bounty II (August 24, 2021), the post-apocalyptic RPG Encased from Dark Crystal Games (September 2021), the third-person game Gungrave Gore (2022), the action horror game The Chant from developer Brass Token, and Massive Work Studios’ Lovecraftian sci-fi shooter Dolmen. Check out the video above to see more of all of these titles.

Planet Of Lana Announced For Xbox Series X|S, Xbox One, And PC