A library of classics

The Infinity Game Table, of course, would be nothing without a solid library of games. At launch, Arcade1Up is focusing on a stable of classics, many of which are under the Hasbro umbrella. Standout titles with huge name recognition include:

None of these games are simple ports, though. All of them utilize the touchscreen display and features like haptic feedback to great success, immersing you in the unique experience of playing a digital board game on the Infinity Game Table. Each game has music and theme-appropriate sound effects, but what’s most impressive is how Arcade1Up altered and added to each game to bring it to life in a way that makes them feel like more than digital copycats.

For instance, missiles rain down from above in Battleship, creating a fiery explosion when you successfully strike a target. Meanwhile, Operation is an entirely different experience. Instead of using tweezers to remove objects from a body, you work your way through mazes, complete with a vibrating buzzer if you collide with the wall. 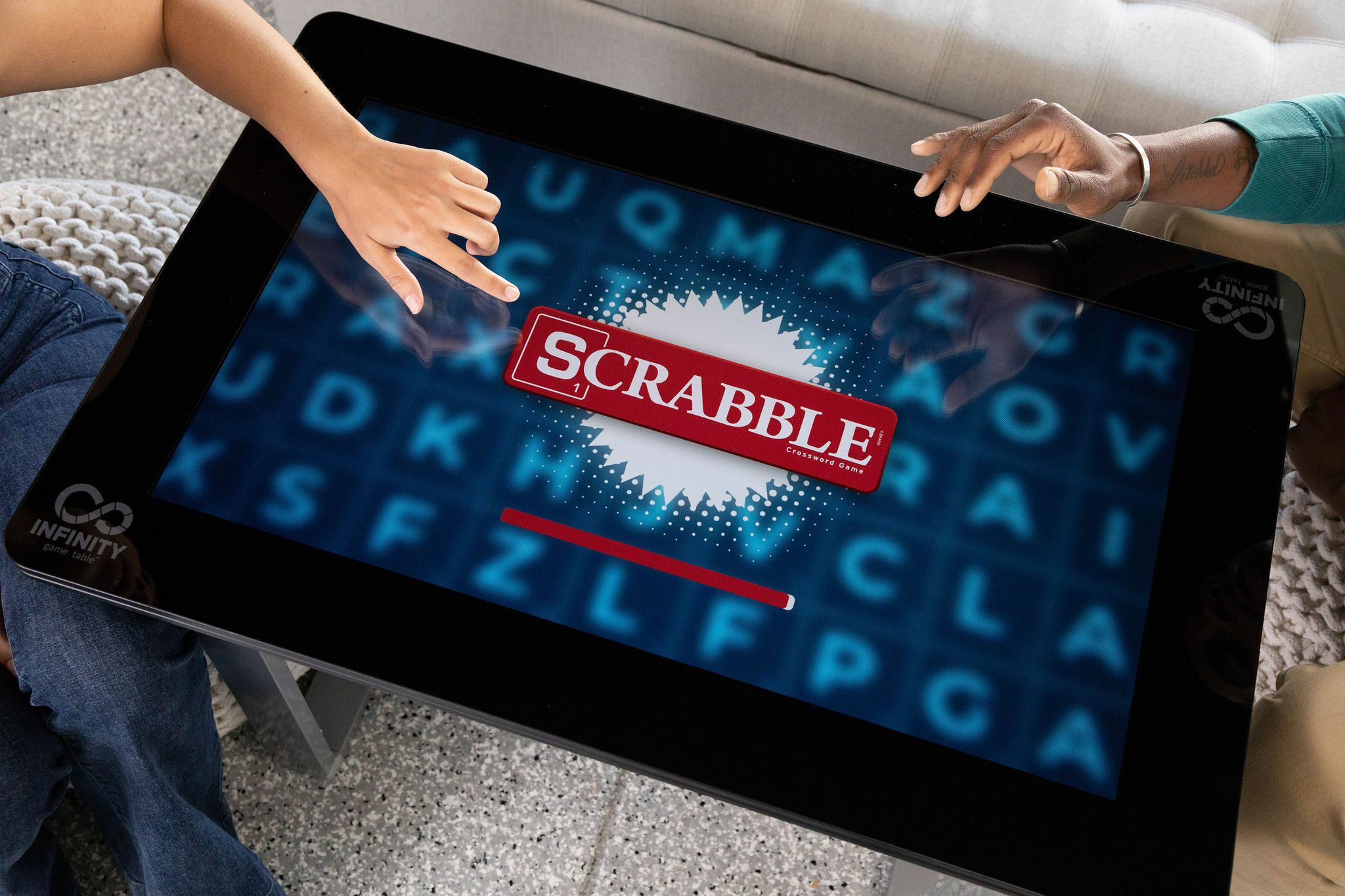 Each of the licensed games feels fresh on the Infinity Game Table.

Many of the classic games have expressive presentations that make them more immersive. In Chutes and Ladders, the picture becomes 3D as you climb up a ladder or zip down a slide, and characters have little celebrations. Candy Land is similar in this regard, making both of these games that are traditionally aimed at small children a real joy to play (especially if you have kids around). Monopoly has all sorts of quality-of-life features, from enthusiastic token moves to police sirens blaring when you get sent to jail.

Naturally, there are some concessions to be made with the digital format. In Scrabble, you do have to use included physical card blockers to ensure other players don’t look at your letters when you reveal them. And it is hard to beat the feeling of shaking five dice in a cup while playing Yahtzee–even though the Infinity Game Table admirably tries to replicate this.

Each game also has its own settings that you can adjust easily on the fly, and some games even have house rules you can apply. For example, in Battleship you can change the settings so that you get five missiles each turn at the beginning, which helps speed up play.

In addition to the popular games listed above, the Infinity Game Table also has checkers, chess, Tic-tac-toe, a word search, Sudoku, backgammon, and even coloring books and puzzles. The more generic offerings aren’t as impressive in terms of production value, but all of them still work as intended. There are, however, a few real duds, including knock-off air hockey and basketball games, which get old after a few minutes. That said, my wife and I have spent countless hours playing What’s the Word?, a fun game where you see how many words you can make out of six letters. 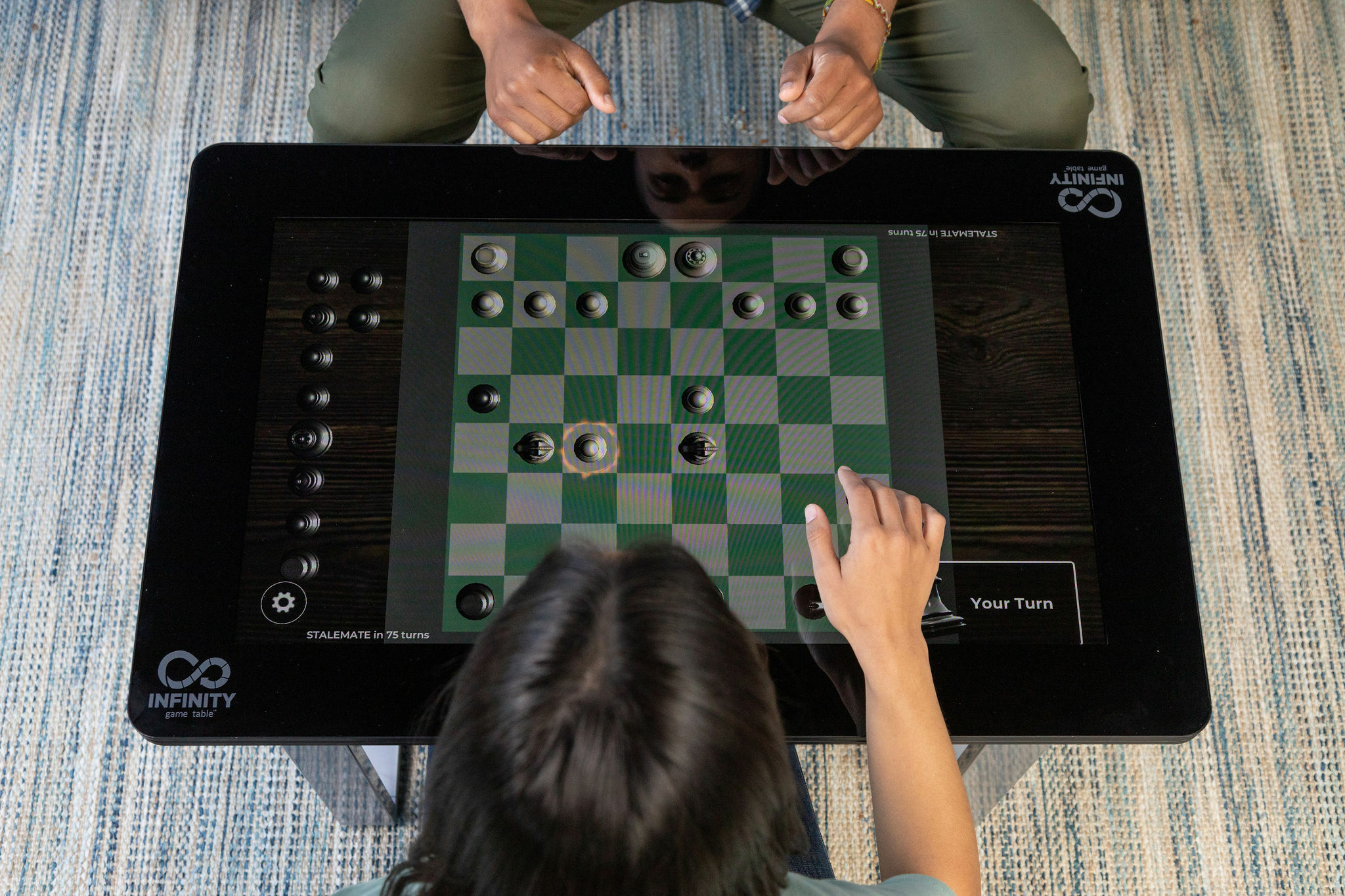 There are also other classic games like chess and checkers.

It varies by game, but the Infinity Game Table supports up to six players, and you can even play online multiplayer if you know someone who also has a table. I’ve only had a chance to test the online multiplayer once, but it worked flawlessly.

While the launch library offers a ton of variety, the Infinity Game Table’s real power comes from its ability to expand. Arcade1Up will be adding more games to the library over time–some free, some paid. The first paid titles will be Ticket to Ride and Pandemic, two excellent modern board games. It’s also an open-source development environment, so more board game developers could choose to add their games to the platform in the future.

High-quality game performance is bolstered by a clean, easy-to-use interface and accurate touchscreen. The table boots up quickly and brings you directly to the home screen with your collection of apps–represented as tiles–right there in front of you. Games you don’t have downloaded are located right next to your library, and a larger tile on the right side of the screen cycles through images of upcoming games. It has a tablet-style interface, which makes it feel modern and intuitive. You can also alter the background theme, adjust sound levels, vibration, and other settings with just a few taps.

Doubles as a coffee table

The Infinity Game Table, for all of its power under the hood and interactive games at your fingertips, is a fairly unassuming device. It really does look like a black coffee table with a screen fitted in the center. It has hard bumpers along the edges and few logos, but when it’s off, it wouldn’t be ridiculous to not even know what it was. This, to me, is a nice feature, as it allows the table to blend into any room without sticking out. The power button is concealed underneath the table alongside two USB ports and an SD card slot (both of which aren’t used for anything at the moment, though future accessories could utilize them). 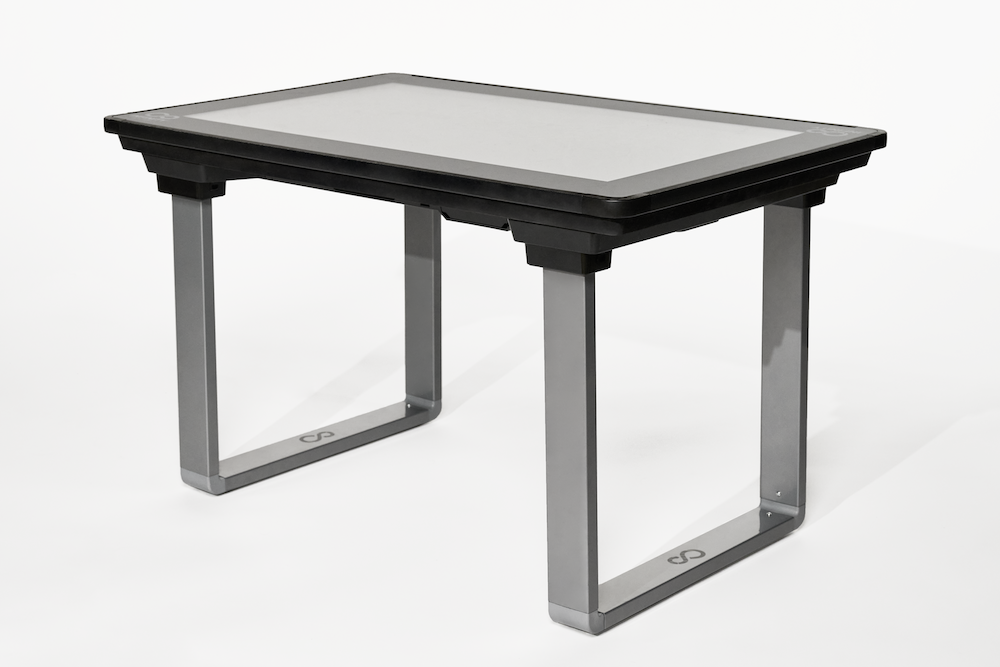 The Infinity Game Table only takes a few minutes to fully assemble.

The table is also water-resistant and designed to withstand wear and tear like a conventional coffee table. The table even comes with a few coasters, practically begging you to use it at all times. I’m not brave enough to place a drink on the table, as I have two small children, but it’s supposed to be impervious to spills since the speakers and other components are housed on the bottom of the unit.

The metal legs easily snap into dedicated slots. The entire setup process took me only a couple of minutes. It’s essentially a plug-and-play device. Alternatively, you can use the table without the legs if you want to set it on a taller surface like a kitchen table.

I tested the 24-inch model, but Arcade1Up is also releasing a 32-inch model. The tables take up virtually the same amount of space; there’s just more unused blank space with the 24-inch version (more room for drinks and snacks).

As a parent, the coolest aspect of the Infinity Game Table is the convenience it provides. If we want to play a game as a family, we’re ready to go in a minute. When we’re done, we simply power it off. There’s no setup or cleanup involved. This may not seem like a huge deal, but switching between physical board games takes up time–and how often do we decide not to play something because it’s a hassle to get started? More often than we’d like to admit, probably. The Infinity Game Table solves this problem while also offering an engaging way to play some of the best family board games around.

The 24-inch model costs $500, while the 32-inch model goes for $700. The former sounds relatively reasonable considering how many games you get as well as the possibility to download and purchase more digital games in the future. The 32-inch model does sound a bit pricey at $700, but if you want more screen real estate, it’s likely helpful if you are playing with a larger group.

All that said, considering that Arcade1Up cabinets can cost $500 or more, the Infinity Game Table could be viewed as a bargain if you’re really into board games, especially when considering how much the included board games would cost on their own.

The Infinity Game Table will be available to preorder exclusively at Best Buy starting July 17.

The Infinity Game Table is a stellar piece of tech that reimagines classic board games in a digital format. The table has an understated, high-quality design that will fit into any room. It works as advertised out of the box with minimal setup, allowing for a fast pick-up-and-play experience each and every time you boot it up. Each of the licensed games feels specifically designed with the table in mind, adding sound effects, 3D visuals (in places), and clever tweaks to make each and every game feel at home on the Infinity Game Table. While there are a few underwhelming inclusions in the library, the good far outweighs the bad. With more games on the horizon and online multiplayer support, the Infinity Game Table’s sturdy foundation will likely only get more impressive over time.

Yooka-Laylee Is Being Made Into A Board Game